The water route on the Odra River is constantly developing and it may soon be a very important Polish transport route. The „Polish Waters” investments in the Gliwicki Canal include comprehensive modernization of locks. Last year, 16,000 vessels were cleared by waterway, and about 230 thousands of tons of coal were flowed from the Gliwice port to the Wrocław CHP plant. In comparison to that, to carry 230 thousand tons of coal from Silesia to Wrocław it is needed about 96 trains – a total of 3,833 wagons. In 2018, this amount of coal was transported by the Gliwicki Canal on several hundred barges. The spoil from the Upper Silesian mines hit the Odra Waterway to the Opole power plant and the Wrocław Heat and Power Plant.

The Gliwicki Canal in the shipping season in 2018 recorded a total of 16 thousand of vessels. In 2017, there were 12,000, and two years earlier, 5,000. This waterway gets more and more popular with every year, not only for the transport of bulk cargo, but also it provides an important part of passenger and tourist shipping. The return of inland waterway to the Oder is subject to modernization of six locks of the Gliwice Canal, which is run by the State Water Farm „Polish Waters”.

This year, we celebrate the 200th anniversary of the Bohumín Protocol’s strategic document, which in 1918. set out the rules for regulating the Odra River and adapting it to the navigation. As of today, the Oder Waterway is 646 km long and is stands for the longest inland shipping route in Poland.

The Gliwicki Canal is a part of the Odra Waterway, for which the current year is also a jubilee year. 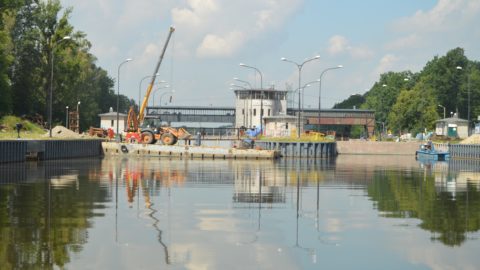 Nearly 80 years ago, on December 8, 1939, after five years of construction, the canal was completed. The six locks are of utmost importance for the navigability of the Canal, which allow to overcome the difference in height of 43.6 m between extreme points. Locks in Kłodnica, Nowa Wieś, Sławięcice. Rudziniec, Dzierżno and Łabędy for almost 80 years used to be only maintained, serviced and subjected to immediate repairs. The current investment of Polish Waters within the framework of the project „Modernization of the Oder locks on the section on the board of the Regional Water Management Board in Gliwice, adaptation to the third class of waterway” is the first modernization of locks in their history, and work on locks in Sławięcice and Nowa Wieśare under the supervision of the conservator because these objects already hold the status of a technical monument.

The project is carried out in two stages, so that the modernization works will not torpedo the navigation on the Gliwicki Canal. Each lock has two chambers: north and south. After completion of work in one chamber, the front of the works is transferred to the next one, while maintaining the continuity of navigation. All the work was organized in such a way as to allow for the sluicing using one active chamber. 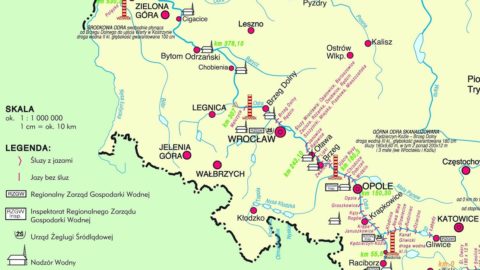 In the first stage of modernization of the Gliwicki Canal, the locks Kłodnica, Rudziniec, Dzierżno, Łabędy were closed, of which two were already fully completed. This year, the works on the locks Dzierżno and Łabędy have been completed. At the same time, the second stage of the project is being implemented, involving the modernization of locks in Sławięcice and Nowa Wieś.

The scope of works includes the reconstruction and renovation of sections of avanports and lock chambers, reconstruction of reinforced concrete lower and upper heads with the bottom, repairs of engine rooms and control room buildings, as well as modernization of drive mechanisms. Depending on the condition, steel gate gates are regenerated or replaced with new ones, their total weight exceeds 360 tons.

The scale of the project is evidenced by the fact that each lock in Sławięcice or Nowa Wieś is connected with the use of 5,800 m3 of water in one chamber. This is a sufficient volume to fill 290.000 steel buckets. The entire investment is to be completed in the first quarter of 2020.

In addition to the ongoing modernization works, the Polish Waters Gliwice division is preparing for the implementation of the third stage, which assumes the improvement of sailing conditions on the Gliwicki Canal. This will be the modernization of shoreline insurance and devices functionally related to the channel. All these elements will enable optimal use of the potential of the Gliwice Channel and will make transport by water an attractive alternative to other means, especially for wheeled transport, but also railways. It will also increase the region’s competitiveness and attractiveness for potential investors – said Łukasz Lange, director of the Regional Water Management Authority in Gliwice.

The Oder Waterway belongs to the European system of waterways of international importance and is included in the framework of the trans-European transport network (TEN-T).

The value of the project „Modernization of the Odra locks on the Gliwicki Canal, on the section on the RZGW Gliwice management, adaptation to the III class of the waterway stage II”, implemented by the State Water Farm „Polish Waters” is 72 336 680.00 PLN, of which 61 486 177.27 PLN is co-financed by the EU from the Cohesion Fund under the Operational Program Infrastructure and Environment 2014-2020.