Skip to content Skip to navigation Accessibility
You are at: Home » Country profiles » Bosnia and Herzegovina

Total length of the road network in B&H is 24,796 km. Part of the BiH road network assumed strategic international relevance, within the Western Balkans region, due to its inclusion in the SEETO (South East Europe Transport Observatory) Comprehensive network. The Comprehensive Network identified under SEETO Memorandum of Understanding, shall be considered as a multimodal regional transport network which is the base for the implementation of the transport investment programmes. Furthermore, on 27 August 2015, during the Western Balkans 6 (WB6) Summit held in Vienna, WB6 representatives and the European Union reached an agreement on the indicative extension of the Trans-European Transport Network (TEN-T) to the Western Balkans. As a result of this agreement, the entire SEETO comprehensive network is now integrated into the TEN-T network; consequently, the related TEN-T maps were updated accordingly.

Besides the Pan-European Transport Corridor Vc, extending through Bosnia and Herzegovina, the country’s transportation network is strategically significant for the Western Balkans region due to its inclusion to the SEETO Network. In that respect, the Comprehensive Network, as identified by the SEETO Memorandum of Understanding, should be regarded as a multimodal regional transportation network that forms the basis for the implementation of investment transport programmes.

The Corridor Vc route goes along both BiH Entities, whereas 85% is on the territory of the Federation of Bosnia and Herzegovina and 15% in Republika Srpska. The Corridor Vc motorway route is designed in accordance with all standards, with two separate carriageways, each with two traffic lanes for each direction and one emergency lane on each side of the carriageways. Up to this date, 92 km of Corridor Vc motorway has been constructed and fully operational. Currently the construction works are on-going on three separate sections, as well as the construction of a bridge over the Sava River, where the Corridor Vc is crossing the border and continues along the territory of Croatia.

Out of 1.030,389 km of railway lines in Bosnia and Herzegovina, 91.48% are single-track and 8.52% are double-track lines. The network is deployed 57% in FBiH, 40.4% in RS, and 2.6% in BD. The entire network is based on a standard gauge (1,435 mm) and the majority is single track (92%). More than 85% of the network is now classified as D4 in terms of UIC load categories, allowing maximum loads of 22.5 Tonnes per axle or 8.0 Tonnes per linear meter. Around 76% of the network is electrified with a mono-phase 25kV, 50HZ AC system. The railway network consists of two main strategic lines, which are also the main railway lines for cargo: The North-South line Bosanski Samac-Doboj-Zenica-Sarajevo-Mostar-Capljina, located on Corridor Vc; The West-East line Dobrljin–Bosanski Novi-Banja Luka-Doboj-Tuzla-Zvornik which is the railway line parallel to Corridor X. There are certain limitations in respect of the speed and safety of railway traffic oin the BiH railway network. These are mainly due to the unfavourable geographical configuration, incomplete safety system at stations, outdated signalling, lack of protection at level crossings etc.

With regard to the water transportation, in the region of Neum at the Adriatic Sea Bosnia and Herzegovina has 24 km of the coastline, which has been developed as a tourist area. 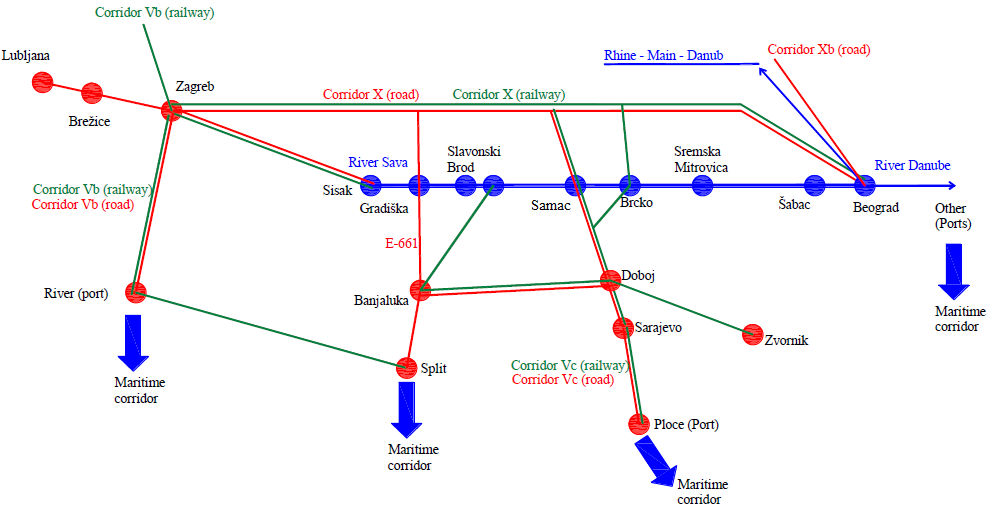 Bosnia and Herzegovina is a Signatory State of the Agreement on the Establishment of the Transport Community in the area of road, railway, inland and maritime transport aimed toward the development of transport network between the European Union and Signatory Parties. Transport Community should be based on the progressive integration of transport markets of the Signatory States of the South-East Europe into the transport market of the European Union based on the valid legal history enclosing the area of technical standards, interoperability, safety, security, social policy regarding the traffic management, public procurement and environment, for all transport modes excluding air transport.

The maps of the indicative ten-t extension to the Bosnia and Herzegovina (core and comprehensive networks):

Ministry of Communications and Transport of Bosnia and Herzegovina