Skip to content Skip to navigation Accessibility
You are at: Home » Maritime Bulletin » Port of Gdynia modern, multipurpose and built with passion

Port of Gdynia modern, multipurpose and built with passion

Gdynia is a multipurpose port specialising in handling general cargo, especially unitised cargo transported in containers and in the ro-ro system.

Another important segment of the port’s operation is bulk cargo handling through specialised terminals. As one of the key container ports on the Baltic Sea, the Port of Gdynia has become the leader in grain and fooder handling in Poland. Handling operations in this cargo grouparecarried out by BTZ (BalticGrain Terminal), MTMG (Gdynia Maritime Bulk Terminal) and OT Port Gdynia Terminal.

The Port of Gdynia is a logistic hub in the Trans-European Transport Network (TEN-T) and a point of entryon the Baltic-AdriaticTransport Corridor. The Gdynia-Karlskrona’Motorway of the Sea’is a naturalextension of this corridor to Scandinavia. The connection is operated by Stena Line, one of the largest ferry operators in Europe.

The Port of Gdynia also has a modern ro-ro terminal with a two-level ramp for handling the largest ro-pax vessels.

In the summer season, Gdynia is a travel destination for impressive passenger ships, becoming a tourist attraction for the city and the port.

The port is managed by the Port of Gdynia Authority, a joint-stock company set up in 2000 to align the port’s infrastructure with the ever increasing market expectations. The priorities of the Port Authority include environmental protection and delivering high international standards of ship, cargo and passenger safety.

Built as one of Europe’s most modern ports, the Port of Gdynia remains one of the key maritime hubs in the southern Baltic and a recognised brand in transport and logistics systems throughout the world. 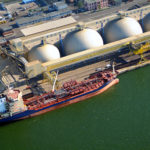