Skip to content Skip to navigation Accessibility
You are at: Home » Home » The visit of the People’s Republic of China’s foreign minister...

“The year 2019 marks 70 years since Poland, as one of the first countries in the world, established diplomatic relations with the People’s Republic of China,” recalled Foreign Minister Jacek Czaputowicz during a visit of Chinese Foreign Minister Wang Yi to Poland. The two ministers co-chaired the second meeting of Poland-China Intergovernmental Committee.

“We are happy that after four years’ break, the Poland-China Intergovernmental Committee meets for the second time,” said Minister Jacek Czaputowicz. The Poland-China Intergovernmental Committee is one of the key mechanisms of Polish-Chinese strategic partnership, which coordinates and plans a multi-dimensional Poland-China cooperation. The meeting brought together representatives of a dozen or so ministries and other state institutions from both countries. Their discussions focused on economic, scientific and technological issues, as well as on the human dimension, including culture, sports and tourism. The Committee’s previous meeting was held in 2015 in Beijing.

The session was opened by the foreign ministers of Poland and China, who then held bilateral consultations. “Our bilateral relations are very intense. We develop our multidimensional collaboration, drawing on the very useful China-Central and Eastern Europe format, which was inaugurated in 2012 here, in Warsaw, and the Chinese Initiative One Belt, One Road,” said the Polish foreign policy chief.

The officials discussed the achievements so far, current challenges and plans for further Polish-Chinese cooperation in the political, economic, scientific and technological dimensions, and as regards people-to-people contacts. Minister Jacek Czaputowicz reminded his Chinese counterpart that China is Poland’s second trade partner in the world. He emphasized that there are opportunities for Poland and China to cooperate more closely in several areas, among them in the mining sector.

The consultations also covered current issues related to multilateral cooperation, also in the context of EU-China relations and the China-Central and Eastern Europe format, and an exchange of opinions on current international developments. The topics included China-US relations, the situation in the Middle East and in the Korean Peninsula, Russia’s policy and Ukraine, and the present situation of the European Union. “We look forward to another seminal meeting of the Poland-China Intergovernmental Committee, which we have agreed will be hosted by China,” summed up Minister Czaputowicz.

After the ministerial meeting, Joint Conclusions taking stock of the second Poland-China Intergovernmental Committee were published. “We appreciate China’s declarations of  readiness to undertake measures to build a more balanced and mutually beneficial economic partnership with Poland,” underscored Minister Czaputowicz at a joint press conference. 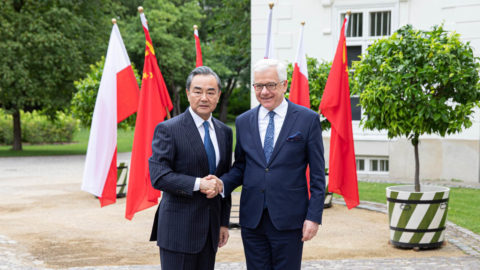