Skip to content Skip to navigation Accessibility
You are at: Home » Home » The Outer Port in Gdynia is getting closer thank to...

In 2018, 23.5 million tons of cargo were transshipped in Gdynia. For comparison, in 2009, the Port of Gdynia reloaded less than 11.4 million tons, which is twice less than in 2018. There was a 14% increase in the first quarter, which can be a sign that in 2019 the record will be broken again. This dynamics of cargo growth put the Port of Gdynia on the leader’s place in regard to Polish ports in the Baltic Sea.

Larger transshipments are the result of a commercial policy that is considered important for every invested in this respect. The port implementation of the investment is also the Cohesion Fund, under the EU Operational Program “Infrastructure and Environment”.

Expansion is necessary to for the further development of the Port of Gdynia, so the construction of the Outer Port provided for in the draft Act of the Ministry of Maritime Economy and Inland Navigation will contribute to that development. This investment is an opportunity for the Port of Gdynia to maintain a high position on the market of port services in the Baltic Sea region. The Outer Port project is implemented in the “green port” concept both in the area of sea and land. Port of Gdynia Authorities also signed a land research contract in order to conduct a natural inventory on the areas designated for the implementation of the road and rail system to the Outer Port, which will include screening of fauna, greenery and fungi.

The expected date of completion of research works is November this year. 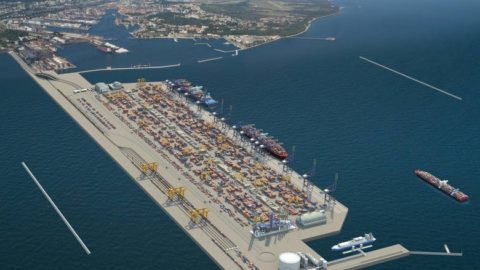