Skip to content Skip to navigation Accessibility
You are at: Home » Maritime Bulletin » The “16+1” becomes the “17+1”: Greece joins China’s cooperation framework...

The “16+1” becomes the “17+1”: Greece joins China’s cooperation framework in Central and Eastern Europe

On the heels of People’s Republic of China (PRC) President Xi Jinping’s busy bilateral tour in Western Europe in March, PRC Premier Li Keqiang started his own multilateral tour in Eastern Europe in April. Designed primarily to visit Beijing’s established partners in European Union (EU) central institutions (EU-China Joint Statement, April 9), Li’s visit nonetheless touched upon a side project of no marginal importance for the larger Belt and Road Initiative (BRI): the “16+1” framework of cooperation with countries in Central and Eastern Europe (CEE). Thus, on April 11 and 12, participants met in the Croatian town of Dubrovnik for the framework’s 8th Summit, as well as for its 9th Business Forum (Agenda of  8th Summit of Central and Eastern European Countries & China – 9th Business Forum of CEEC & China, April 11-12).

Perhaps not coincidentally, the same venue witnessed the advent of the “Three Seas Initiative” in 2016, a sub-regional project meant to increase integration of EU countries in the area—an event in which the PRC took part as an observer (with Assistant Foreign Minister Liu Haixing in attendance).The symbolic value of this place—which was chosen instead of the more convenient Croatian capital—offers a glimpse into Beijing’s intentions in the area: a strand of economic and diplomatic engagement that runs parallel to European integration, without explicitly doubling or challenging it. Thus, the PRC seeks influence in Europe when encountering little or no resistance—seeking to fill an opening when available, but without confronting established players head-on.

Greece as a Putative Game-Changer?

Greece has a set of regional reasons for adhering to the cooperation platform. More precisely, it has long been feeling left behind by developments in the Balkan region, a traditional sphere of influence for Athens. Not only the 16+1, but also the Three Seas Initiative and the renewed impetus for pushing EU enlargement, have proceeded without paying much attention to Hellenic sensibilities or influence—thereby allowing other players to build their positions in the region. This was especially relevant in the context of seeing the BRI building up a foothold in the Balkans, and devising new corridors of communication and transport toward the European core. Finally, for Greece a closer relationship with Beijing offers the possibility of broader benefits, potentially linking up the China Ocean Shipping Company (COSCO)’s investments in the port of Piraeus with a network of other infrastructure projects in the region (National Herald, February 4).

PRC intends to boost the new 17+1 Format with new operational capabilities, more dynamic meetings, and the build-up of a Beijing-driven “coalition of the willing” within the functional limits of the platform. Beijing plans to present Greece as an example as to how China’s multilateral initiative is both attractive, and breaks the confined cultural-historical limits of the CEE cooperation format. Unlike other members, Greece is neither a post-Communist state, nor a new or prospective member of the European Union—but rather, a consolidated capitalist democracy whose economic relations with China gained steam in the last decade.

In addition, the Dubrovnik Guidelines (The Dubrovnik Guidelines for Cooperation between China and Central and Eastern European Countries, April 12) put a strong emphasis on the platform’s success so far, while signaling a more hands-on approach from China—which has proposed that the next summit  take place within its home territory. When considering the static atmosphere of recent years’ meetings, and the geopolitical necessity to display at least symbolic progress, it appears that China is (re)taking over the reins of the project, and guiding it towards objectives intended to prop up the BRI in Central and Eastern Europe.. This latter point is mentioned in the Guidelines, as well as in Premier Li Keqiang’s speech from Dubrovnik (Xinhua, April 12)—thereby offering a glimpse in Beijing’s larger design for the revived 17+1 Format. 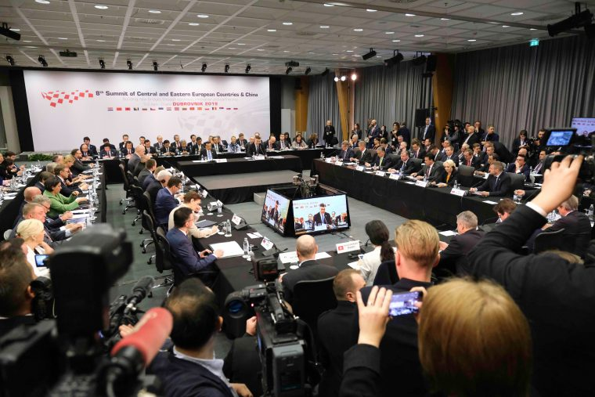 *Horia Ciurtin is Associate Expert for New Strategy Center (Bucharest, Romania), Research Fellow for the European Federation for Investment Law and Arbitration (Brussels, Belgium), as well as External PhD Researcher at the Amsterdam Center for International Law (Amsterdam, Netherlands). He also serves as a legal consultant in the field of international investment law throughout the Balkans and CEE. He recently published the study entitled “A New Era in Cross-Strait Relations? A Post-Sovereign Enquiry in Taiwan’s Investment Treaty System”, in Julien Chaisse (ed.), China’s Investment Three-Prong Strategy: The Bilateral, Regional, and Global Tracks, Oxford University Press, forthcoming 2019. Contact him at h.a.ciurtin@uva.nl.

The whole article can be found here.